Prof. Dr. Sebastian Weydner-Volkmann (né Sebastian Volkmann) is Junior Professor for Ethics of Digital Methods and Technologies at the Ruhr University Bochum’s Institute for Philosophy I. He is a Principle Investigator in the graduate academy SecHuman on cyber security. Until January 2020, he worked at the University of Freiburg’s Centre for Security and Society and Husserl Archive, where he was leading the Freiburg research contribution to the EU H2020 project TRESSPASS. 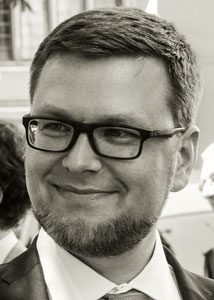 Since February 2020, Prof. Dr. Sebastian Weydner-Volkmann (né Sebastian Volkmann) is Junior Professor for Ethics of Digital Methods and Technologies (Tenure Track) at the Ruhr University Bochum. He is part of the University’s Institute for Philosophy I. He is a Principle Investigator in the graduate academy SecHuman on cyber security.

Before that, starting from 2012, he had been working at the University of Freiburg’s Husserl Archive and Centre for Security and Society. Since October 2017, he was a member of the regular teaching and research staff at the Department of Philosophy.

Prof. Dr. Sebastian Weydner-Volkmann was involved in a range of applied ethical research projects in the field of civil security provision. In the EU FP7 project SURVEILLE, he conducted research on the ethical and perceptive dimensions of surveillance technology (Mai-August 2012). From September 2012 to August 2017, he developed a typology and ethical evaluation framework for airport checkpoints as part of the EU FP7 project XP-DITE. One of the major goals of this research was to provide guidance on ethical and societal aspects in the design process of airport checkpoints, especially on the protection of fundamental rights and privacy. From October 2015 to September 2017, he has accompanied the development of an innovative, privacy respecting solution for THz body scanners as part of the EU FP7 project TeraSCREEN. From June 2018 until is appointment as Junior Professor, he led the University of Freiburg’s research contribution the EU H2020 project TRESSPASS.

Sebastian Weydner-Volkmann has completed his PhD at the University of Freiburg under the supervision of Prof. Dr. Hans-Helmuth Gander. His thesis has been published under the title “Moralische Landkarten der Sicherheit. Ein Framework zur hermeneutisch-ethischen Bewertung von Fluggastkontrollen im Anschluss an John Dewey” (“Moral Maps of Security Provision. A Hermeneutical Framework for the Ethical Evaluation of Airport Passenger Screening Following John Dewey”). For his thesis, Prof. Dr. Weydner-Volkmann was awarded the Wetzstein Award for Philosophy 2017.

For the interim period of December 2017 to May 2018, Sebastian Weydner-Volkmann took the position of Administrative Manager of the University of Freiburg’s Centre for Security and Society, a position he already had for an earlier interim period from November 2015 to March 2016. Furthermore, from April 2016 to Mai 2018, he was involved in establishing the tri-national graduate academy “Security – Risk – Orientation” (SERIOR).

Sebastian Weydner-Volkmann has extensive experience in European research project management. He was responsible for the financial and administrative management of the Centre for Security and Society’s participation in the EU FP7 projects XP-DITE and TeraSCREEN. In both projects, he coordinated European partners as a work package leader for the ethics related research tasks. Since June 2018, he leads Freiburg’s research contributions to the EU H2020 project TRESSPASS.